Our vacation this year was good, but it could have been perfect if we had started a couple of weeks later. As usual we participated in a dog contest and the goal for our trip this time was the agility races at Mellsomvik outside the town of Tonsberg, so this year we had no sweet water sailing at all. 403 M was the total distance, about half the trip last year on channels and lakes. Everything is close on the Swedish West Coast. The distance from Uddevalla to Stromstad is shorter than a trip over the lake Vanern from south to north.

A few excerpts from the logbook:

Finally we were on our way. We left the harbor at 09.30, when we had filled the boat with everything you think you'll need for a few weeks. Both dogs lay on the cockpit floor as usual. Berit and I felt very good while the diesel took us out under the new bridge. The town politicians have named it Uddevallabron, but the natives call it Sunningebron. It's an imposing structure, and I hope both ends will meat at the middle, when it's ready. They build it from both sides of the Sunninge sound. After one hour and a half we reached the village of Henan on Orust. It's a nice place, where you can get everything you need near the harbor. You can even get liquor there in the special store for alcohol, which is a peculiarity in the Scandinavian countries.

Our next stop was Paradise Bay on Hjalton. We took a swim and had a bite to eat there. As Hjalton is our usual goal on weekends it wasn't good enough on a vacation, so we carried on to Smaholmarna. They are a couple of small islands at the threshold to the fjord Gullmaren. You can land at the rocky shore, and it's quite interesting to take a walk there. The picture below is a narrow passage before you reach Smaholmarna. 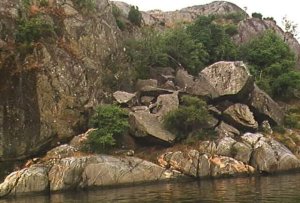 Wind from northeast and very weak. We had to use the engine to go northwards. At the lighthouse Stange Huvud we got a feeling of open sea and my allergy disappeared as always does, when we pass that point. We did some shopping in Kungshamn, and then we headed north again though the canal of Sotenkanalen. We had lunch at anchor near the island of Alvon, where some hopeful sailors tried to land at the rocky shore with poor results. "Tomorrow the will be quite surprised when they take their anchors up and find a big ball of grass around it" I said to my wife. It's our version of the Sargasso Sea.

We went on north in persistent showers. It was not easy to decide where to land in the archipelago of Fjallbacka, so we went on like the Flying Dutchman all evening though it was Midsummer's Eve. Finally we landed at Porsholmen at a peak to the south, which is the only possible landing spot for a sailboat there. In this way we managed to celebrate our Midsummer alone willingly or not. We saw a couple of canoes and a tent on the meadow near by, but the young couple in the tent was busy arguing all night through.

We woke up in rain and weak northeasterly wind and passed by engine Grebbestad and Havstensund. At Trosso we found a vacant buoy for lunch, swim and a walk with our dogs at the shore.

Finally we got good wind for sailing. We set sails and managed to sail on the same bow all the way to the Koster Sound. On the Kosterfjord we were hunted by a thunderstorm, that gave us strong winds, but we had no lightning and rain before we had anchored in the Koster Sound and put the kettle on.

Nice weather and long walks on South and North Koster. The dogs liked this very much. Our dinghy made it very easy for us to pass the Koster Sound and in the afternoon we rowed to the seafood restaurant at Langegarde to have a great meal together with a Norwegian couple in a boat moored there. There was a lot of Norwegians at he Koster Island perhaps 90 % of the boats had Norwegian flag.

Bad weather again. We went to Stromstad at the mainland to get some groceries and water. You can't get water from a hose on the Koster Islands. We went as far into the harbor as possible, and for once we stayed for the night because it was raining cats and dogs.

We bought new covers to our beds. It was quite a luxury because we have always had old bedspreads in the boat before. Then we headed for our usual anchoring site in the Koster Sound again. It rained and we put the cockpit cover up and turned the cockpit into a bathroom. A camping shower with 10 liters of hot water is not bad.

In the afternoon the sky was clear and we passed the harbor of Ekenas on our way to the Bay of Kilesand. We anchored there to get some change and rowed ashore with the dogs. We had a nice lunch at Kostergarden while we tied our dogs on top of an ant nest. It took Sarah a couple of days to get over that frightful experience. In the evening we tried to get room at a bridge in the harbor of Vettnet, but it was impossible because all the Norwegians had landed alongside the bridge. Norwegians can't use an anchor says our Norwegian friends. At last we had to anchor at our usual spot in the Sound instead. Perhaps it's too deep in Norwegian waters, so the people there never use their anchors at a bridge. 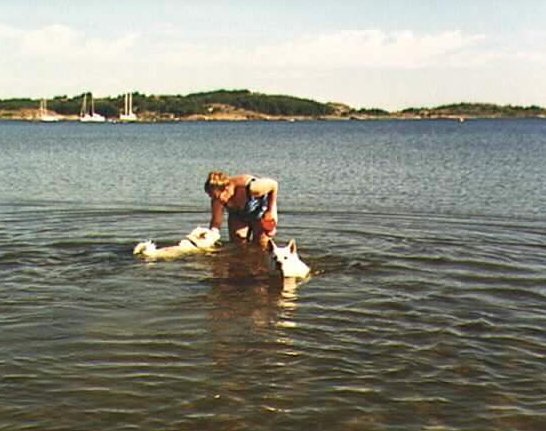 An unusual plant only to be found on Koster and Falsterbo.

Cloudy morning. Sailed to Stromstad to take our daughter Eva, her baby Karin and the race dog Nina aboard. Eva brought a lot of stuff along for the baby. We had to tie the baby carriage to cabin roof. We went to the island of Karholmen for the night. We were alone there probably due to the poor weather.

We made an early start for Norway dressed in rain clothes. When we had passed Sacken and Herfol the sun appeared. We stopped at Hanko, which is a very snobbish place in Norway. The crew took walk with the dogs, while I prepared the boat for the crossing of the Oslofjord. When we came out on the fjord and took course for Vrengen we found that it was to high against the wind and water, so we headed for Bolerne instead on a lower course. It was a wise decision and we could sail over the Oslofjord without any problems or seasickness. When we reached the archipelago we started the engine and went north inside the islands outside Tjomme. Late at night we landed in Mellsomvik and took a walk to the agricultural school, where the dog races were held. 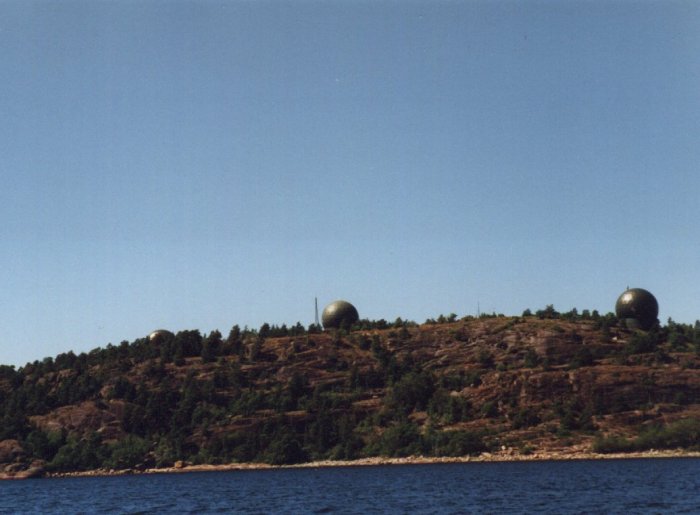 A beautiful Saturday with sun and swimming. A good mooring at the peak of the bridge at Mellsomvik. 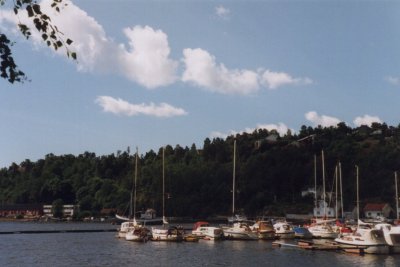 The races began. Eva was no 10. Our Norwegian friend came to visit us in our boat.

Eva was no 4. I took a trip to tog en trip to Tonsberg to buy ice cubes at a cost of 35 NKR. Very expensive. Cloudy afternoon spent by Jurun's and Kjell's house. 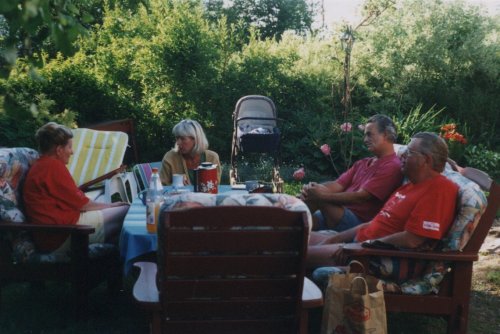 Nice weather and Eva won the race. You can see how proud she is with her flag. We celebrated her victory with a barbecue on the beach with some of the other contestants. 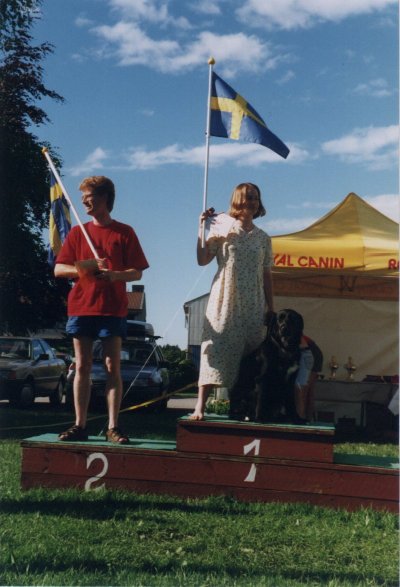 Nice weather and no race this day. We sailed to Tonsberg for sightseeing. We bought that expensive ice again. We had dinner at Macdonald's, and it tasted just like it does at home. In the evening we went to Jorun and Kjell to eat whale stew. 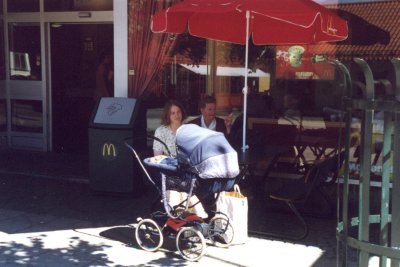 A very hot day. Eva was no 19 and I went sailing with my friend Owe Lundberg, who had left his boat at home on the East Coast of Sweden. He really longed for his boat. You can see Vrengen between the islands of Tjomme and Notteroy on the pictures. 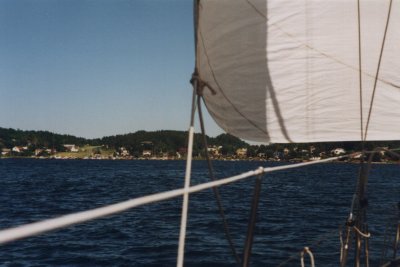 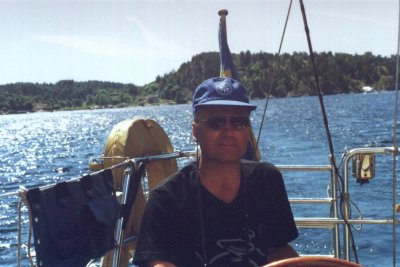 Another hot day. Eva and Nina had a great race, but they were only no 5 in the race. Picture of Nina going over the A-obstacle. 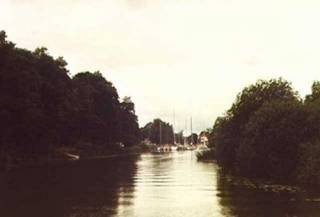 Now we had to say farewell to Jorun and Kjell. They went along with their boat as far as Notteroy, where we crossed the Oslofjord without any wind. We reached Hanko at 21.00 in the evening and managed to fill our tank with diesel before they closed for the night. Eva was homesick and we continued outside all islands all the way to Stromstad, where we arrived at 01.30 in the morning. 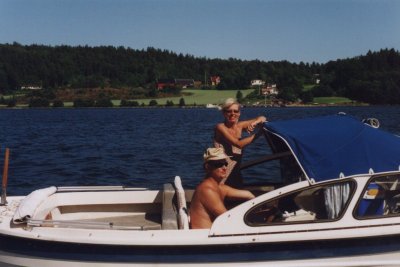 Eva's fiancé Bosse arrived in the morning and the crew once again was my wife and our two dogs. We sailed to Koster and anchored in the bay outside Brevik. We took a swim and walked on the beach.

It was a very hot morning, and we had to go against the wind to endure the heat. We landed on Vaderoarna and took a swim there, but the temperature was 31 degrees C (88 F) in the shadow. We couldn't say in the sound on Vaderoarna, so we had to escape to the lagoon of Gluppo, where we anchored at a windy place. Most of the time we spent in the water that night.

A little island in the lagoon of Gluppo 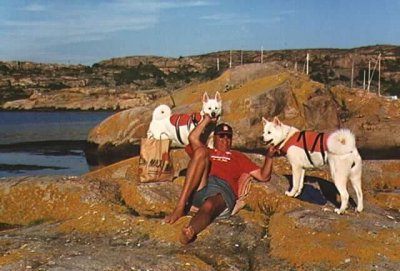 Full speed ahead to Kungshamn to get ice. In the evening we arrived at the overcrowded harbor of Lysekil to meet our friends Siv and Bosse. We had a nice evening in their boat, Sivana II.

Early in the morning we took off for Hjalton, where we anchored at our usual spot near a Danish boat Milou from Elsinore. The Danes offered us beer to borrow our dinghy for five minutes. A good trade I think. We went ashore and picked a few mushrooms. 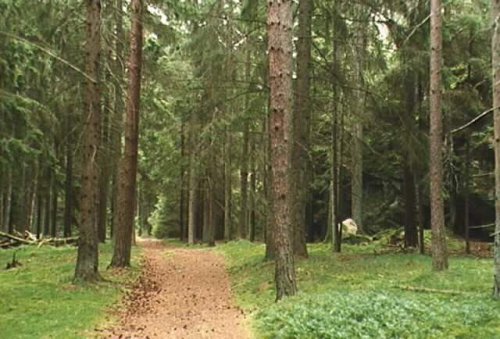 The wind increased, but in the Paradise Bay the water was smooth as a millpond as usual. We gathered mushrooms and listened to a lot of rescue missions on the VHF radio. 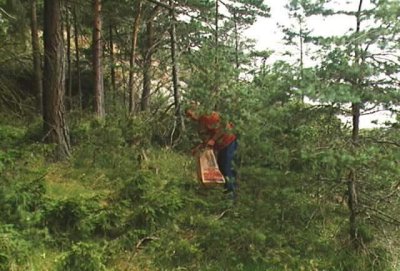 A little less wind this morning so we sailed homewards to the harbor at Rodon. Our trip was over after more than 400 M at sea. Pia II is back and resting. 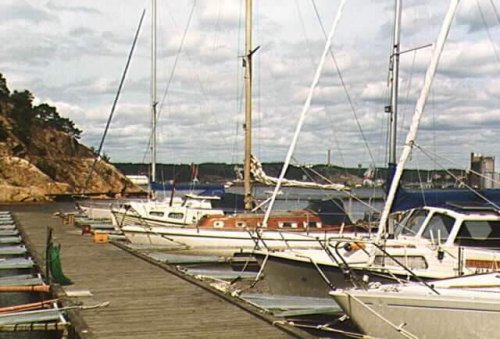 A week later I took a trip to Skagen in Denmark with an old friend, but that is different story. Next year the dog races are held in Denmark. I wonder if we will go there by boat. We'll see. 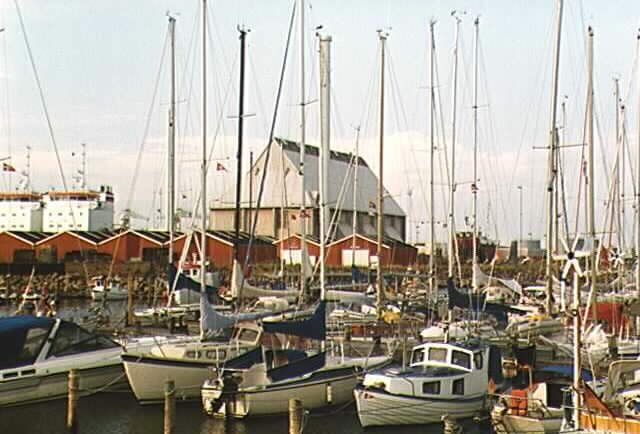